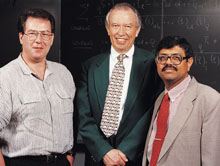 In nearly every story about science, there’s a little black box of uncertainty.

This is a big problem for Krishnaswami Alladi and Alexander Berkovich of the University of Florida’s math department. They’ve made a groundbreaking discovery in a field most people don’t understand. Their discovery is built on the work of great thinkers most people have never heard of. And it could have important, everyday applications in the future, even though the researchers themselves can’t say what those applications will be.

"You can’t explain this in words you would use to explain the work of a great English poet," says Alladi, head of UF’s math department. "When people say, ‘I want to do this in 300 words,’ I have to tell them that it’s impossible."

In 17 words, Alladi and Berkovich recently solved a problem that has puzzled the world of mathematics for 30 years.

What they’ve found, according to Alladi, is "a four-dimensional identity that subsumes the Göllnitz theorem as a special case" — and they’ve been trying valiantly to explain it to people ever since. But more about Göllnitz later.

"I use the analogy of a skyscraper," Alladi says. "You cannot start with the 20th floor. Our work is built on the work of Göllnitz and Göllnitz is built on Schur. You have to start from the bottom and work your way up."

At the foundation is Leonhard Euler (pronounced "oiler"), an 18th-century Swiss mathematician who served in Prussia’s Academy of Arts and Sciences under Frederick the Great.

Euler was not the finest of courtiers: He had no taste for the intrigues of the academic world, and in philosophical debates, he often was trumped by Voltaire and others.

But he was the most prolific mathematician in history. During his lifetime, he produced 560 books, some of them after he became blind, and some of them about partitions.

Most people don’t know what partitions are, but we deal with them all the time. In mathematical terms, a partition is described as "a representation of an integer as a sum of positive integers." For instance, the number 3 has three partitions: 3, 2+1 and 1+1+1. As the name implies, a partition is a number broken into parts.

When we use partitions in everyday life, it’s called "making change." For instance, if you bought this newspaper from a newspaper rack, you put some combination of coins into the machine: two quarters, perhaps, or four dimes and two nickels. But you (probably) didn’t think about all the possible combinations of coins you could have used. Euler thought about this sort of thing all the time.

In 1989, Alladi and his former teacher, Basil Gordon, began to experiment with the idea of "colored" numbers. If you divide numbers into suits, like cards in a deck of 52, you can increase the number of partitions possible for a number.

The idea worked. When Andrews came to Gainesville to give a lecture in 1990, Alladi met him at the airport with the results of their work.

"All I can say was that he was captivated," Alladi says. "He thought about nothing but this problem for a week." And by the end of the week, he had developed a proof that confirmed their work to be valid.

If Schur’s work was a two-suit card game, and Göllnitz was a three-suit game, it stood to reason that the next big theory would grow out of a four-suit game. But another 10 years would pass before the rules of that game would be hammered out.

Berkovich arrived at UF in January 1999 to work with Alladi and immediately began to attack the Göllnitz problem. By the time Andrews returned for a lecture in November 1999, the pair had developed a theorem that seemed to be the breakthrough Andrews had asked for 30 years before. Alladi showed him that theorem, too, but even Andrews wasn’t able to prove this one in a week.

Over the next four months, the three mathematicians tried several possible approaches to the problem, Alladi says. They finally chased down the final loose end in the proof during Spring Break this year and the proof was completed.

Ask what their theorem does, however, and you’re well into black-box territory. According to Alladi, if you understand Euler’s theorem — the "beautiful" symmetry he discovered between two unrelated types of partitions — then you’ve got a vague idea of the nature of the discovery he and Berkovich made. But that’s a simple analogy.

"It’s a theorem in the same spirit," Alladi says, "but it’s much more difficult to explain to a layman."

So, what good is their discovery? No one can explain that better than Alexander Berkovich. He came to the field of partitions rather late in the game after working on conformal field theory with his mentor Barry McCoy at State University of New York at Stony Brook.

Conformal field theory has two major applications. For one thing, it helps scientists understand phase transitions — the thing that happens when a solid becomes a liquid and a liquid becomes a gas.

It’s also a part of string theory, which Berkovich describes as the "Holy Grail" of physics. "Superstring theory is the search for a symmetry which will unite all the forces of nature," Berkovich says. "So that could be considered an application."

Berkovich’s work dealt largely with the world on the subatomic level, where the laws of physics often seem to stand on their head. Physicists often have referred to the subatomic world as something like the looking-glass world of Alice in Wonderland.

But Berkovich was finding it to be more like Ramanujan’s garden. As it turns out, complicated problems of partition theory crop up all the time at the subatomic level.

Alladi and Berkovich are convinced their breakthrough will be valuable to mathematicians in the near future, and that it may have major applications in coming years. This is more than just a hunch: Even though it belongs mostly to the world of abstract mathematics, the theory of partitions keeps turning up in weird places.

Ramanujan’s work, for instance, is useful if you want to know how liquid helium behaves when it’s poured on graphite. Or — for a closer-to-home application — Euler’s work can help create a model to describe the average running time of a computer program.

And then there’s that everyday use for Euler’s work in number theory, the one mentioned earlier.

"Each time you send an e-mail, you profit from Euler’s work," Berkovich says. Euler’s work in number theory is a key element in computer encryption, the thing that makes e-mail private and e-commerce safe.

"Do you think that Euler, if you had asked him two centuries ago, would have known that his work would have this application?" Berkovich said. "We can predict that this discovery will have applications in the future, but we cannot have any idea what the applications will be."