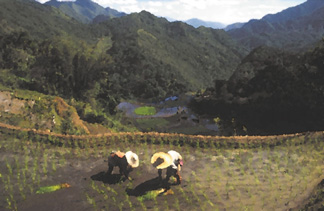 If ever there was a crop suited to the tropics, rice is it. A water-and warm-temperature-loving grain, rice thrives in the wet-season climates of Asia and parts of Africa.

There, the flowering plant serves as the staple food for nearly 2 billion people, more than any other crop in the world. In Cambodia, where rice makes up 75 percent of the calories in the average diet, it is difficult to imagine life without it. Indeed, in some Asian countries the words for rice and food are identical.

All of this worries Ken Boote and Hartwell Allen, scientists at the Carbon Dioxide and Climate Change Project, a joint project of the University of Florida and the U.S. Department of Agriculture's Agricultural Research Service. 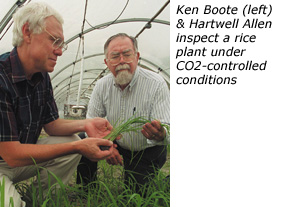 Global warming - gradual heating of the Earth thought to be spurred by the burning of fossil fuels and its greenhouse-like effect on the atmosphere - is widely anticipated to continue during this century. The trend is expected to be driven by an anticipated increase in carbon dioxide, the result of fossil fuel consumption coupled with widespread deforestation.

Funded largely by government agencies concerned about the impact on food supplies, Boote and Allen have spent more than a decade studying how the warmer temperatures and higher CO2 levels might affect crops. They have focused on soybeans, dry beans such as kidney beans, and rice.

The researchers' findings: While increased CO2 tends to boost rice and other crop yields, elevated temperatures have the opposite effect - and render rice plants totally impotent at high temperatures. If the moderate or more extreme forecasts for temperature rise come true, that could hurt the countries that depend most on the grain.

"I think I am worried from the standpoint of future generations," Boote says. "If we hit the higher side of the predictions, it's a problem for different regions - especially the tropics, Asia and Africa."

Boote, a professor of agronomy, and Allen, a USDA and UF crop and climate research scientist, are not alone in their conclusions, although only a handful of other scientific groups worldwide are probing the effects of temperature on rice and other grain crops.

John Sheehy, a crop ecologist and modeler at the International Rice Research Institute in the Philippines, says the UF research is solid and far-reaching.

"The UF work looks very convincing to me," Sheehy says. "UF has played a prominent role in this area and is notable for the continuity of its efforts - the only other institution that has had a complementary approach is the University of Kyoto in Japan."

Rice wasn't in the picture when the UF climate change research first started in the mid-1980s. Instead, the focus of that early research was probing the effects of CO2 on soybeans. To get at the question, UF researchers designed plastic growth chambers that allowed them to control and monitor most aspects of the plant's growing environment, pumping in CO2 as the plants grew.

With soybeans, and later with other crops, the researchers and their colleagues found the news is good - if increased carbon dioxide is the only change.

Worldwide, CO2 levels have increased about 31 percent since the start of the Industrial Revolution, rising from 280 parts per million to about 367 parts per million today. A century from now, projections put CO2 levels at about 550 parts per million. The biggest determining factor: What sort of corrective precautions the world's nations agree to implement. These precautions could include reducing emissions through cleaner power plants and cars, developing new technologies to trap carbon underground or in the water or switching to alternative "biofuels."

Soybeans become more productive as CO2 rises, the UF researchers found. Among the earliest such findings, the results anticipated much more recent results with other crops. For example, research by Bruce Kimball at a USDA Agricultural Research Service laboratory in Phoenix has found wheat plants produce about 15 percent more grain at CO2 levels of 550 parts per million. Cotton production soars 40 percent at similarly high levels, he has found.

Higher levels of CO2 boost yields mainly by increasing plant photosynthesis. The increased CO2 also tends to close the pores on the plants' leaf surfaces, resulting in increased storage of moisture in the soil and water savings, the UF researchers say. Thus, the relative benefits of CO2 are greatest when the plants are water-stressed, they say.

Even rice responds well to CO2, with yield rising as much as 30 percent more at double today's levels, Boote and Allen say. The problem is that as CO2 increases in the atmosphere, it produces a blanketing effect, impeding the escape of the sun's energy from the Earth's surface back through the atmosphere to space. The result is warmer global temperatures.

"The real question is what the CO2 is going to do to the climate," Kimball says. "If there were no change in the climate, then clearly we should be embracing it."

Most scientists agree, however, that the climate is warming. In the worst-case scenario, average global temperatures could rise nearly 8 degrees Fahrenheit by next century, according to a report this year by the Intergovernmental Panel on Climate Change (IPCC), the international scientific group charged with advising governments on climate change. Some scientists have even predicted a temperature increase of 10 degrees or higher. If emissions are significantly reduced, the temperature increase may be 5 degrees or less, the IPCC predicts. 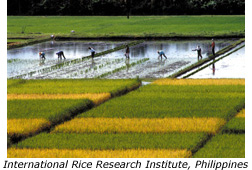 Although the UF researchers did some work on the effects of temperature on soybeans, the Department of Energy encouraged them to look at other important crops, so Boote and Allen began to look at rice instead. They launched their first study around 1987.

Boote is an expert in crop modeling - using computers to extrapolate what occurs with individual plants or small sets of plants or entire crops. To create working models for rice and climate change, he needs data not only on yields but also on a host of other variables about how the plant responds to a heated environment. So he and the other researchers created a second generation of growth chambers known as soil plant atmosphere research chambers, or SPARCs. The chambers look like large, clear terrariums, except for an array of mechanical equipment piggybacking on each one.

As the plants grow, the equipment controls and tracks humidity, temperature and CO2 levels. By studying these variables, the scientists are able to deduce the rate of photosynthesis, or the process by which plants turn sunlight and CO2 into oxygen and sugar. So precise is the equipment that the researchers can record the crop's photosynthesis rate every five minutes for the entire 140-day season.

"It's a state-of-the-art control of the plant environment," Boote says.

Although they continue to process the wealth of data from initial experiments, the results for several different varieties of rice so far are unambiguous. When temperatures exceeded a daily maximum of 88 degrees and daily minimum of 70 degrees, the plants produce less rice. Yields drop 6 percent for every degree of temperature increase through about 104-degree daily maximum and 86-degree daily minimum, when complete failure occurs.

"Extrapolating our results, one could imagine that all rice production could be eliminated in the tropics, although there is almost certainly some heat tolerance in varieties not tested," Allen says.

The 88-maximum, 70-degree minimum is not a future prediction. Most tropical regions currently exceed that range today, Bote says.

Elevated temperature within the ranges tested does not cripple the leafy, or vegetative, parts of rice plants. But it does affect the plant's ability to form seed, or grain. At relatively small temperature increases, this occurs because the life cycle of the plant is sped up, giving it less time to take in nutrients, process them and allocate them to seeds. At higher temperatures, the pollination process itself begins to fail. Rice is self-pollinating, with both male and female sexes present on each plant. Heat tends to make the pollen, or male contribution, less viable. 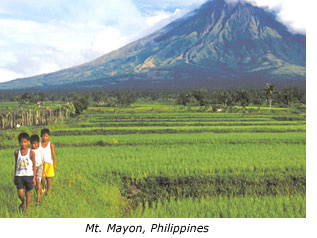 Whether these temperature conditions will become important depends on how much the Earth warms and how variable the weather becomes. If the most conservative predictions of a less-than-five-degree change turn out to be correct, and result in a 30-percent decrease in yield, the effect may be a wash - elevated CO2 will increase yields as much as elevated temperature decreases them. But if the Earth continues to heat up, the beneficial effects of CO2 will be negated. Even a five-degree average increase would be problematic because normal variability, such as unusually hot days, could affect rice at precisely the wrong time in its life cycle.

"The pollination period is two to three weeks," Allen says. "If you get high temperatures each day during this period, you're not going to have much, if any, yield."

As temperature increases make rice more and more difficult to grow in the tropics, production might shift northward to areas that are only marginal producers now, such as northern Japan.

"If we get temperature changes of these magnitudes, there are going to be winners and losers in the world," says Jeff Baker, a plant physiologist who studies the effects of climate change on rice at the USDA Agricultural Research Center in Beltsville, Md.

The problem is, the losers would lose a lot. Asia both produces and consumes the vast bulk of the world's rice. In 1999, Asia produced more than 540 million metric tons of rice and consumed more than 464 million metric tons, both topping 90 percent of the world total, according to the International Rice Research Institute. Although the biggest producers include China and Japan, which have cold-weather climates in some regions, most are tropical, including Bangladesh, India, Indonesia, Myanmar and Vietnam.

And then there's the question of whether other conditions for successful rice cultivation, including abundant freshwater, could be found farther northward.

"Rice in Siberia - can you imagine? Is there enough water?" Allen asks rhetorically, adding that rice could also displace other crops now grown in northern regions.
"The tropical region will be a net loss, and globally there will be a net loss," he says.

One possible solution may be altering rice plants, through genetic engineering or traditional breeding, to become more temperature resilient. If scientists could make rice plants flower earlier in the day, for example, they might avoid the pollination problems during the heat of the day. But Allen says such manipulation will not be simple. The two rice varieties tested so far, one tropical and one temperate, both crashed at the same high temperature, suggesting that a genetic "quick fix" might be difficult to find.

Another possible solution would be to locate wild relatives of rice that grow in very hot environments, and incorporate their tolerance to high temperatures into productive varieties, Allen says. Baker goes a bit further, saying it may be possible to make rice more heat tolerant by giving it genes from other plants.

"I think we have enough knowledge and ability to adapt to a warming climate," he says.
Still, both Boote and Allen believe the true solution is less biological than political.

"Even though you don't really know, you would like to avoid an unpleasant surprise if temperature goes up," Bote says. "Somebody truly being intelligent can figure out 'How can I be more energy conserving, use less fossil fuel and slow down temperature increases that might be hazardous?'"